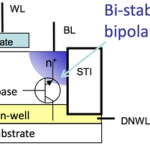 At the IEEE’s International Electron Device Meeting (IEDM) in December a start-up named Zeno Semiconductors introduced a 1-transistor (1T) SRAM.  Given that today’s SRAMs generally use between six and eight transistors per bit, this alternative promises to squeeze the same amount of SRAM into a space 1/6th to 1/8th the size of current SRAM designs, leading to significant cost savings.

The device is really a single standard NMOS transistor that behaves as if it were two bipolar transistors connected into something like a flip-flop, although the transistors’ bases are open, rather than cross-coupled to the opposite transistors’ collector, as is done in a standard flip-flop.  Click on the post’s graphic above to see the whole diagram of the cell.

The cell is selected by activating the gate, and the bit is set or sensed via the source and drain to provide a differential signal.

This is a decidedly clever departure from standard SRAM configurations, and it reflects a careful observation of the actual END_OF_DOCUMENT_TOKEN_TO_BE_REPLACED