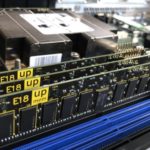 This week’s HotChips conference featured a concept called “Processing in Memory” (PIM) that has been around for a long time but that hasn’t yet found its way into mainstream computing.  One presenter said that his firm, a French company called UPMEM, hopes to change that.

What is PIM all about?  It’s an approach to improving processing speed by taking advantage of the extraordinary amount of bandwidth available within any memory chip.

The arrays inside a memory chip are pretty square: A word line selects a large number of bits (tens or hundreds of thousands) which all become active at once, each on its own bit line.  Then these myriad bits slowly take turns getting onto the I/O pins.

In this second part of a five-part series contributor Ron Neale continues his analysis of selector technologies focusing the nature of the mystery of Forming and a number of the many unanswered questions.

Thin film selectors, or memory matrix isolation devices, based on chalcogenide glasses, would appear to be the devices of choice as non-volatile memory arrays move towards 3D stacked structures. Considerable progress has been made in finding selector compositions which can be doped to provide a suitable level of structural stability required for the NV memory array application.  These were discussed in the first part of this series.

However, there is one known unknown in relation to this type of selector and it is the need for Forming, with the unknown being the physical nature of the changes which occur within the device as a result of the Forming process and any implications those changes might have on reliability and performance. The outward manifestation of Forming is a change in threshold voltage from an initial value to some lower more constant operating value. Not just a minor threshold voltage change but a significant one, a reduction of the order 36% in some cases.

The diagram below illustrates END_OF_DOCUMENT_TOKEN_TO_BE_REPLACED