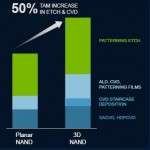 Early this month I was invited to participate in Applied Materials’ (AMAT) Analyst Day.  The sessions were rich in data covering the markets that would profit the company over the next few years.

Naturally, The Memory Guy fixated on those presentations that dealt with memory.  When it came to the upcoming transition to 3D NAND, AMAT had a lot to say.

A later post will explain what 3D NAND actually is.  Suffice it to say that today’s approach to making NAND flash has nearly reached its limit, and the approach that manufacturers plan to use in the future involves making NAND strings that stand on their ends.  This has phenomenal implications on the process wafer fabs will use to build NAND flash chips.

So far process migrations have centered around reducing the dimensions of the flash gate.  This has been achieved by using increasingly-elaborate photolithography.  With the move to 3D NAND manufacturers will actually back off a step or two, and focus on materials more than they do on technology.  This suits AMAT very well.

The new approach will involve depositing 32, 64, or 128 (or more) layers of alternating polysilicon and silicon dioxide on the chip, then etching a deep trench and filling it with other materials.  The aspect ratio of the trench is going to be 60:1, which is significantly more difficult than today’s trench DRAMs, with an aspect ratio of 8:1.  Once this has been successfully accomplished, the layers will need to be etched at one end in a staircase (with very tight tolerances) so that connections can be made.  These are daunting tasks!  They also require more deposition and etch equipment than is commonly used in NAND production, and require less lithography equipment.

Applied believes that this shift will create a total market of over $500 million for deposition and etch equipment for every 100,000 NAND wafer starts.  The company says this is a 50% growth over the current NAND flash market (see graphic.)

It will be interesting to see how this plays out over time, but I have no reason to doubt what the company told us.  The move to 3D NAND will be a very challenging one for NAND flash makers, and they will need to change their processes significantly once this juncture is reached.

Objective Analysis specializes in assisting our customers during this sort of transition, and in helping them to plan for the economics surrounding them.  Please contact us to see how we can work for your company to provide an important competitive edge.