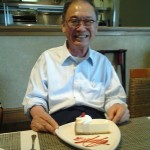 One of the more fun aspects of last week’s Flash Memory Summit was the presentation of the Lifetime Achievement Award.  This is something that the show’s management has allowed me to do for the past four events.

This year’s award went to Dr. Simon Sze, who co-invented the floating gate transistor (the basis for all flash, EEPROM, and EPROM) at Bell Labs back in 1967.

Sze and his partner Dawon Kahng were finishing lunch in the company cafeteria with a cheesecake dessert.  The two discussed what would happen if a MOSFET was built with extra layers like the layers in the cake.  Their intent was to use semiconductors to replace the core memories then used in computers.  Cores are expensive, bulky, slow, and power hungry.

The two researchers built a simple prototype that worked the first time.  Their dream of replacing core, though, was achieved by another invention, DRAM, that was invented in the same year by IBM’s Robert Dennard.

Since its invention the industry has gone on to produce over one pentillion floating gates, or a one followed by 21 zeros.  The exact number we worked out at Objective Analysis was:

After the award presentation a few of us went across the street to enjoy a celebratory lunch.  At the end of his meal Dr. Sze treated himself to a cheesecake dessert.  I simply HAD to take a photo of the event!

Those who would like to see an interview of Dr. Sze can visit TweakTown for a video.

3 thoughts on “Cheesecake and Floating Gates”