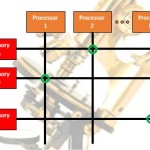 The Memory Guy has recently run across a point of confusion between two very similar terms: Crossbar and Crosspoint.

A crosspoint memory is a memory where a bit cell resides at every intersection of a wordline and a bitline.  It’s the smallest way you can make a memory cell.  Think of the wordlines and bitlines as the wires in a window screen.  If there’s a bit everywhere they cross, then it’s a crosspoint memory.

In most cases a crossbar is a communication path in a computing system.  (Of course, there are exceptions, the main one being a company, Crossbar Inc., that is developing a crosspoint memory technology!) A crossbar communication path is topographically similar to a crosspoint, but its function is to connect a number of memory arrays to a number of processors.  Visualize a vertical column of memory arrays named A, B, C… and a horizontal row of processors named 1, 2, 3… as is illustrated in this post’s graphic.  The crossbar can connect Processor 1 to Memory A, or to any other memory that is not already connected to another processor.  These connections are represented by the circles in the diagram.  You can see that this is an efficient way to allow processors to share a memory space to achieve very high speed inter-processor communications.

Crossbars are quite likely to become prevalent over the next few years.  Intel is spearheading an NVMe over fabric standard, and crossbars could play a role in this effort.  Crosspoint memories also seem poised to become a big part of the world of memories with the new 3D XPoint Memory that Micron and Intel recently introduced.  This could get pretty confusing!

Let’s hope that the industry settles on terminologies that are less similar to each other!

2 thoughts on “Crossbar or Crosspoint?”