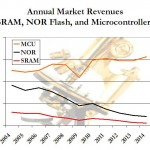 In a move touted as a merger of equals, Cypress will acquire Spansion in an all-stock transaction slated to close in the second quarter of 2015.  The purchase price is estimated at $1.6 billion.

One striking feature of this transaction is the similarity of the NOR flash and SRAM markets.  Both are comprised of a broad offering of diverse products, none of which sells in the kind of high unit volumes typical of DRAM or NAND flash.  This allows the two companies to win designs at the engineer’s desk, rather than in purchase negotiations, allowing prices to stay firm and profits to remain healthy.  Typically a system will continue to use the original part for its entire life cycle.

Unfortunately, the two markets also share the fact that they are in decline, with revenues decreasing steadily year after year.  This is quite clear in the graph above – the two lower lines represent NOR flash and SRAM revenues for the past ten years, with a projection for 2014.  This decline has driven Cypress and Spansion to find other markets to pursue in order to increase their revenues.

Both Cypress and Spansion have expanded into the MCU marketplace, which is crowded but growing , as can be seen in the chart, in stark contrast to the declining revenues of  SRAM and NOR flash.  In microcontrollers, the two companies have non-overlapping products.

The combined company will hold a very strong intellectual property (IP) position in charge trapping memory technologies, which are required for the production of 3D NAND flash, the future of all NAND.  The NAND flash market is poised to grow to $40 billion or larger by 2017.  Even if the combined company nets only 1% of revenues in royalty payments it will enjoy a very significant income of $400 million.  This will provide important cash to the combined company that it can use to further its goals in newer markets.

Although this merger shows a lot of strength, and complementary products, Objective Analysis does not view it as one with extraordinary synergies.  Both companies are well positioned in their own memory markets, and both are poised to grow into microcontrollers, but the move to take market share away from larger MCU players will be a tough battle and may drag on for a number of years.