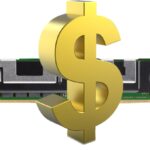 During Intel’s latest earnings announcement the company provided information to indicate that 3D XPoint, which Intel sells under the name “Optane”, may have finally reached break-even: It may no longer be selling at a loss.

How would The Memory Guy know?  Well, in fact, I don’t, but I can make an informed guess.

The chart below shows profits for NAND flash makers from 2016 through the most recent quarter.  It’s a rough way of comparing major NAND flash manufacturers’ business.  As of August 14, all major NAND makers have reported their earnings for the second quarter of 2020, and that appears at the end of this chart. 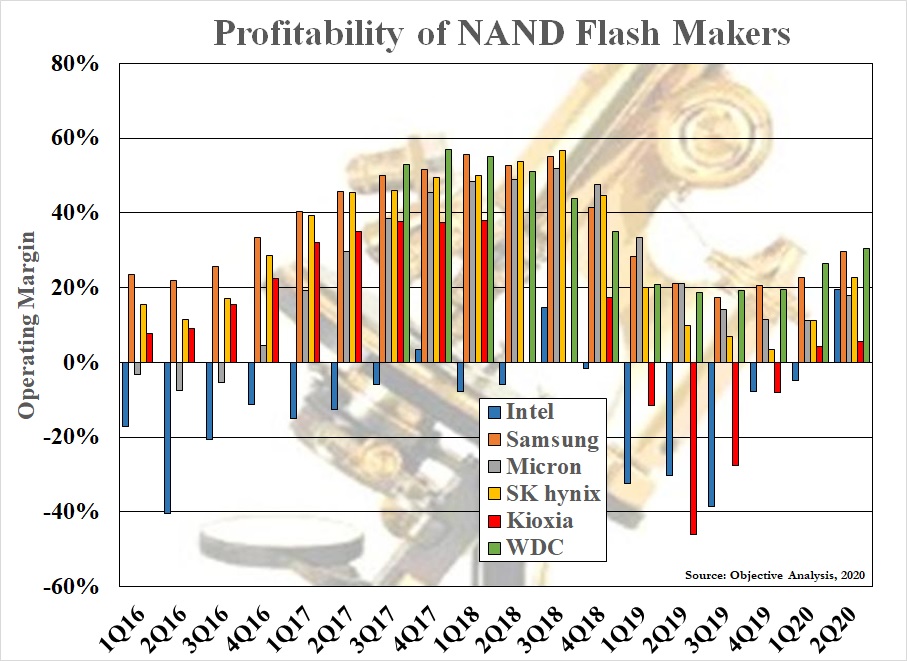 There are a lot of side notes for the chart:

In brief, this chart is far from perfect.  Still, it’s a useful way to compare the companies.

The important take-away from this chart is that Intel’s NSG margins have been negative every quarter except for 4Q17, 3Q18, and last quarter, 2Q20.  During 2017 & 2018 the other NAND flash makers had impressive profits.  Why didn’t Intel?

The Memory Guy guesses that Intel was profiting from its NAND flash business as much as its peers, but the 3D XPoint Optane effort was sucking all of those profits out of the business, and more, to cause losses.

If we zoom way in on this chart to show just the past two quarters we can see that Intel’s NSG profits for the second quarter are suddenly on a par with all other NAND flash makers.  This is the first time this has happened. 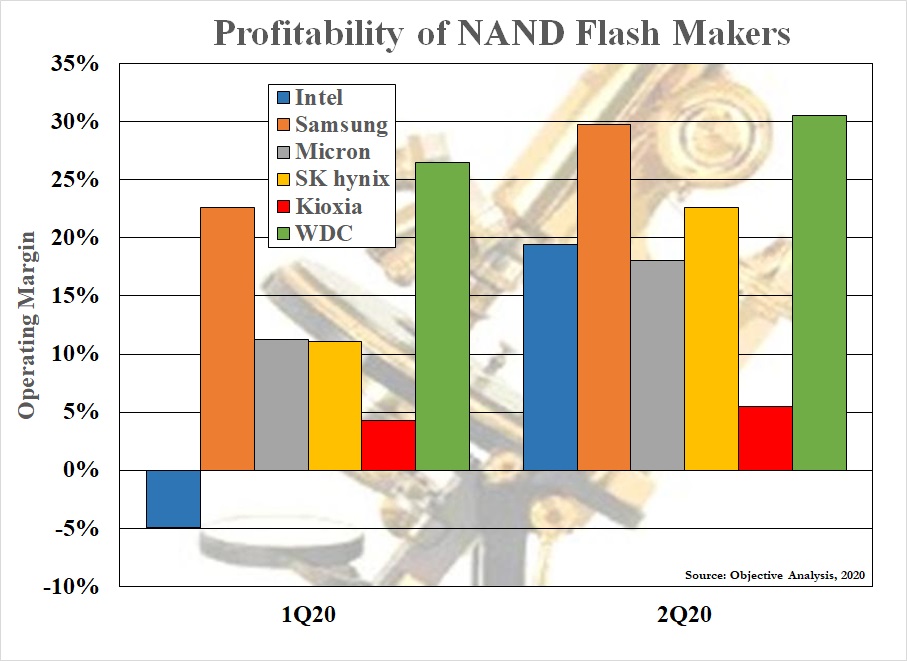 In the second quarter of 2020, Intel’s NSG posted a profit of $322 million, giving it an operating margin of 19%.  This is close to the operating margins of the other companies in the chart:

Since Intel’s NSG margin is now comparable to its peers, then it’s reasonable to assume that the group’s NAND profits are no longer being offset by Optane losses.

Even before Intel and Micron announced 3d XPoint memory five years ago The Memory Guy argued that a new memory would lose a lot of money until it ramped to volume.  We now have concrete proof of that since Intel has lost well over one billion dollars per year in 2017-2019 to bring 3D XPoint to the break-even point.

But there’s something confusing here.  When 3D XPoint memory was first announced partners Intel and Micron boasted that it was: “10 times as dense as today’s Conventional Memory,” meaning DRAM.  If it’s that dense, and if it only has to sell for half of DRAM’s price, then why did it only now become profitable after three years of billion-dollar losses?  That’s because of the economies of scale.  This is something that is explained in depth in a new report Objective Analysis and Coughlin Associates recently released: Emerging Memories Find Their Direction.  This mechanism is the major impediment to the acceptance of new memory technologies, and will be the single most important consideration as new memories vie to displace today’s standard technologies.

The economies of scale have allowed Intel to finally reach the break-even point, and from now on Optane is likely to either continue to break even or to make a profit.  This is enormously important if the company ever wants to spin off the Optane business.  A spin-off seems very likely since Intel has exited nearly every memory business it has participated in since its founding: SRAM, DRAM, EPROM, EEPROM, NOR flash, Bubble Memories, and PCM.  The only two left are NAND flash and 3D XPoint.

To get a solid understanding of how the economies of scale impact the market for new memory technologies please look into purchasing the report mentioned above: Emerging Memories Find Their Direction.  It can be purchased online for immediate download.  Find out how by clicking the link.  It’s just one more example of the ways that Objective Analysis helps our clients with their strategic planning efforts.