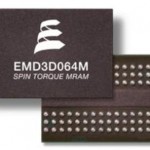 For the past decade or so memory researchers have been looking to Spin Transfer Torque (sometimes called “Spin Torque Transfer”) MRAMs as a way of getting to tighter processes than conventional toggle MRAM.  It seems that current densities in toggle MRAM rise too high as the process shrinks – at some point the process could no longer scale since chips would burn themselves out during programming.  The ST-RAM paves Everspin’s path toward higher densities and tighter process geometries giving it a cost and density advantage that toggle MRAM could not reach.

Everspin says that it plans to scale this technology to gigabit memories.

The new product is designed to look, feel, and perform like a DDR3 1066 DRAM, with the additional benefit that it’s nonvolatile.  This should give it a lot of appeal in a broad range of existing applications.  Everspin has its eye on Storage Class Memory, a market that promises to develop over the long term as computer architects change the way they look at memory and storage.  (This will be the subject of an upcoming post.)  The company has even built a standard DDR3 DIMM using ST-MRAMs.

The chip is expected to become widely available in 2013.  Although it may not yet be in a position to replace standard DRAM and NAND flash, Everspin is doing a good job of finding sockets for battery-backup SRAM & DRAM to replace with MRAM.