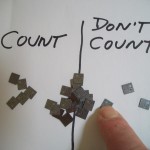 Today I saw an announcement from another market research firm about a new report with flash memory market shares for 2011.  I found it remarkable that the way these chips are counted varies enough that the company decided to openly discuss this issue right in the press release for the report!

Memory market statistics are compiled by numerous firms: The World Semiconductor Trade Statistics (WSTS) sold in the US and Europe by the Semiconductor Industry Association (SIA), Gartner Dataquest, IHS iSuppli, Web Feet, Semico, Forward Insights, and even DRAMexchange.  Lots of entities use conflicting definitions of what is and what is not a chip.  This causes each company’s numbers to differ from the others’.

In the case of WSTS, a chip that is packaged with another chip into a board becomes a system.  If the system is made by the chip maker, then the revenues and unit shipments for these chips are not counted.  This means that virtually nothing manufactured by SanDisk is counted in the WSTS NAND flash shipments.  This presents problems as flash memory makers try to move their customers away from “raw” NAND flash to “managed” NAND.  Managed NAND chips are packaged with controllers that help to hide the differences between two NAND chips made using two different process technologies.  According to WSTS’ policy, the more successful a company is at transitioning its OEM customers to managed NAND, the smaller will be its WSTS-reported shipments.

While the WSTS approach might exclude both unit shipments and revenues, other companies adopt an approach that includes the revenues but does not fully count chip unit shipments.  Flash cards like SanDisk’s are not the only devices that include multiple chips.  Most NAND flash chips are sold in stacks with two or four NAND flash dice per package.  Most companies would call such a stack a single component.

An even stranger situation occurs with stacks of multiple memory types

Sometimes these stacks are counted as NAND, and sometimes as NOR, but rarely as both.

Nobody that I know of calls them a DRAM with a NAND or NOR chip inside.

Market research firms who survey semiconductor manufacturers to compile statistics often run into a situation where the surveyed company sorts its shipments in a way that may suit the company’s business objectives without being aligned with the researcher’s survey objectives.  That stack I mentioned of NAND, NOR, and DRAM may include a Spansion NOR chip (with Spansion shipping and reporting the final product), an Elpida DRAM (which Elpida is likely to report as a sale), and a Hynix NAND (with Hynix reporting this as well.)  It’s even worse if Spansion combines its discrete NOR and its stacked products into one all-inclusive number that the researcher must then try to sort out.

So far, Objective Analysis has been able to easily side-step this issue – we don’t publish chip statistics.  As the company grows we may need to change that policy, and if we do, we will make certain that whichever definition we choose is one that is useful and perfectly clear to our clients – they would expect nothing less of us.