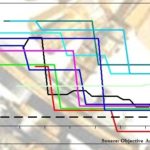 Every year the folks at VLSI Research provide The Memory Guy with an opportunity to share the latest Objective Analysis forecast with the world.  They record a 20-minute video highlighting the forecast in a conversation between me and VLSI’s chairman, Dan Hutcheson.

Over the course of each video I not only present the forecast, but also give an overview of the thinking behind it.  Typically I explain the impact of high or low capital spending in prior years, but in some forecasts I explain how other issues (in particular NAND flash’s excruciating conversion from planar to 3D) can create a shortage independent of capital spending patterns.

We also go over what went right or wrong with the prior year’s forecast.  Things that  go wrong are generally macroeconomic issues like the 2008 global financial meltdown, which caused the first quarter of 2009 to collapse, dragging down the rest of the year, and the combined effects of China’s 2013 currency devaluation and the oil price free-fall in 2014.  Objective Analysis doen’t do a good job of forecasting years with such calamitous macroeconomic events, but we take consolation in the  fact that nobody else does, either!  Not even highly-reputed economic think tanks.

In the presentations I make over the course of the year, I will often share a scorecard to report to the audience how we have done with our forecasts since 2008.  That’s because we’re very proud of our track record.

That scorecard is shown in the table below.  Review it for yourself to see how close we have come each year.

If you click on the hot link for any year you will be taken to the short video recorded by VLSI during December of the prior year.

As far as we know, no other semiconductor market research firm provides this kind of information.  Many people are squeamish about disclosing their failures, especially if they only hit the mark a fraction of the time.  I should add that many forecasters change their outlook frequently, allowing them the luxury of being able to tell the world that their November forecast gave an accurate picture of how the year would end.

The chart below is something that I put together in 2008 to illustrate this phenomenon.  It tracks 12 forecasts for 2007 revenues starting late in 2006.  I only did this once because it took so long to compile, but it shows a valuable point.  While the year ended with 3.2% growth, only Objective Analysis (the dashed black line at 1%) and VLSI (the pale green line at 4.6%) were even close to that figure at the beginning of the year! 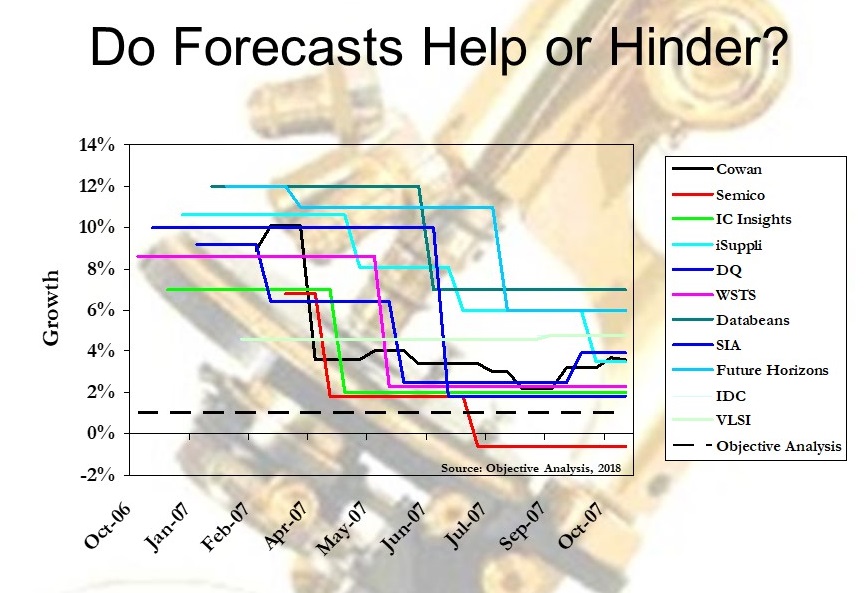 At Objective Analysis we don’t think that continually-updated forecasts are helpful to the people who need to plan their businesses a year or more in advance.  A forecast that converges on the year’s actual outcome after a portion of the year’s business has already transpired can hardly be worthwhile!  Instead, wouldn’t it be  better to have an outlook one, two, or three years in advance that you knew was likely to match the market’s actual performance?  Our clients certainly think so, and their business performance bears that out.

How much better could your firm perform if you had a forecast that gave you a very precise picture of the upcoming years?  Don’t answer that.  Just give us a call or send an e-mail to explore ways that we can help.

Many thanks to VLSI Research for recording these videos and providing them on line.