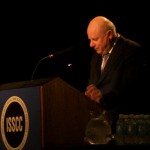 The annual International Solid State Circuits Conference (ISSCC) is a gathering in which the brightest minds in semiconductors come to meet and share the results of their recent research and development efforts.  This year the four keynotes at the opening plenary centered on a “Green” outlook, through Storage, Control, Computing, and Energy.

Naturally, as “The Memory Guy,” I focused all of my attention upon the storage keynote, given by SanDisk’s recently-retired CEO Eli Harari.  Some of the more interesting points I came away with were:

The presentation included several historical landmarks I won’t include here and some humorous twists, as well as slides so technical that I didn’t understand them.  (I have always been unable to grasp the basic concepts of energy bands.)  Most important were the life lessons from an undisputed leader in the industry.

Harari’s keynote had the rapt attention of everyone in the room.