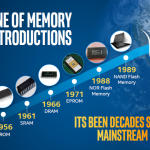 With Micron & Intel’s July 28 introduction of their new 3D XPoint memory both companies touted that his is the first new memory in a long time, and that the list of prior new memory types is short.

The Memory Guy finds both lists puzzling in that they left out a number of important technologies.

For example, why did Intel neglect EEPROM, which is still in widespread use?  EEPROMs (or E²PROMs) are not only found in nearly every application that has a serial number (ranging from WiFi routers to credit cards), requires calibration (like blood glucose monitoring strips and printer ink cartridges), or provides operating parameters (i.e. the serial presence detect – SPD – in DRAM DIMMs), but they still ship in the billions of units every year.  In its time EEPROM was an important breakthrough.  Over the years EEPROM has had a much greater impact than has PROM.

And, given that both companies were willing to include tubes, a non-semiconductor technology, why did both omit the most important random-access memory prior to semiconductor memories, the core memory?  Core memory was the basis for all computers and minicomputers for most of  the 1960s and 1970s.

There are several alternative memory technologies that didn’t make the list, and some of these have shipped in respectable volumes.  MRAM and PCM have both shipped tens of millions of units, and FRAM has probably shipped in hundreds of millions of units.  Both plated wire memories and core rope memories enjoyed limited success and were chosen by NASA for use in various satellite programs.  But these are small numbers compared to the billions of DRAMs and NAND chips that ship every year, so their omission may be justifiable.

Maybe I am too picky, but I found it a little disturbing that Micron used a photo of a dual pentode, a component of radios and televisions, instead of showing the Williams Tube or the Selectron that they were probably referring to.  The Selectron has many more pins and a very unique look, and the Williams Tube resembles a television picture tube since it uses a steerable electron beam, or “Cathode Ray” and works the same way as the Cathode Ray Tube (CRT) that was used as the picture tube in all television receivers and computers in the 20th century.

Now, Intel & Micron may have left all of these other memory types off their lists out of neglect, or perhaps they threw their timelines together in a hurry, but you have to wonder if they wanted to keep the number of technologies as low as possible to make the introduction of 3D XPoint more impactful.

An interesting point is that many of these technologies were either invented or first shipped by Intel, namely SRAM, DRAM, EPROM, Bubble Memory, and NOR flash.  Intel has introduced and ramped a number of memory technologies over the years, including EEPROM, later abandoning each market when it attracted numerous competitors and became unprofitable.

No matter what, the memory business has a rich history, and it’s puzzling that some important technologies were left off these companies’ lists while less important ones were included.

7 thoughts on “How Many Kinds of Memory Are There?”