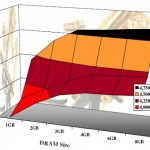 In a comment to a recent Memory Guy post I stated that NAND flash can reduce DRAM requirements, even in PCs.  Some readers have told me that they wonder how this could be, so I will write this post to explain.

Some years ago Objective Analysis noticed that clever server administrators were able to use SSDs to reduce their systems’ DRAM requirements.  Not only did this save them money, but it lowered power and cooling requirements as well.

Thinking that this might work on other kinds of computers, we commissioned a number of benchmarks to be performed on a PC.

In every case the minimum amount of DRAM was very small.

This benchmark data was compiled, written up, and explained in depth in the report: How PC NAND Will Undermine DRAM, which can be purchased for immediate download using the link in the title.

One of the figures from the chart appears at the top of this blog post.  It illustrates the performance of PCMark Vantage, TV & Movies  across our range of NAND & DRAM sizes.  Let me walk you through it:

A close look at the surface chart shows that there is a steep relationship between the DRAM size and the PCMark performance toward the left, then things start to level off toward the right.  This is clearest along the bottom of the chart, but can be seen throughout.  The leveling off for this particular benchmark occurs at 4GB of DRAM.

If you were to look at the chart from the end you would see that there is a pretty steep relationship between the flash size and the performance for the entire range of flash.

This benchmark was one of a number that we ran, most of which showed similar results.

At the time this report was published one gigabyte of DRAM cost about six times as much as one gigabyte of NAND flash.  Today that difference has expanded to about 20:1.  This would serve to make the argument fall even more strongly in favor of adding NAND rather than DRAM.

How can this be?  If you think of memory + storage as one big complex then it’s not too hard to understand why NAND would be able to help reduce DRAM requirements.  I like to say that there are two ways of looking at the memory and storage in a virtual memory system: Either the memory is there to make the disk look faster, or the disk is there to make the memory look bigger.  Either way, memory and storage look like one single entity to the application program.  The Virtual Memory System manages the two so that they appear to be a single item.

By increasing the size of the DRAM a user can make the disk appear faster.  That’s really all that a memory upgrade does.  Adding a flash layer also makes the disk look faster.  Since both perform the same task at different speeds, then a larger number of flash gigabytes ought to be able to accelerate the system just as well as a smaller number of DRAM gigabytes.  This is indeed the case, once the DRAM has reached a certain minimum size.

Since you can purchase 20GB of NAND flash today for about the same price as 1GB of DRAM it is only natural that the trade-off would fall in favor of NAND most of the time.

This may come as a surprise to some, but it really works that way, and is very thoroughly documented in the report.

As more people become aware of it, we can expect for users to change the way that they upgrade their systems, leading to important changes in the market dynamics of both NAND flash and DRAM chips.

The analysts at Objective Analysis are very “Forward-Looking” people who guide our clients to decisions that result in market leadership.  Strategists who would like to gain a competitive edge are encouraged to contact us to explore ways that we can help.

2 thoughts on “How NAND Flash Can Reduce DRAM Requirements”