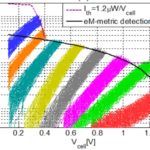 At a technical conference hosted by the IEEE this week IBM announced the results of nearly a decade of research in which its scientists have been investigating the emerging technology known as “Phase Change Memory” (PCM).  The scientists presented a means of successfully storing three bits per cell for the first time, while also addressing all of PCM’s challenging idiosyncrasies, including resistance drift and temperature drift.

Commonly referred to by the erroneous nickname “TLC” for Triple Level Cell, this technology squeezes three bits of data into the space of a single bit, essentially cutting the cost per gigabyte to about one third of that of a standard memory chip making it closer in cost to flash.

With this step IBM expects to help drive a new memory layer into existence, one that will fit between the cheap and slow NAND flash used in SSDs and the fast but expensive DRAM used for main memory.  Such a layer would improve the cost/performance of all types of computing equipment, from the lowly PC right through the massive supercomputer.  For the time being, IBM has set its sights on using this technology in its Power and OpenPower servers, and in its FlashSystem all-flash storage arrays.

IBM is also pleased with the fact that PCM is a “persistent” memory, that is, it retains its contents even when power is lost.  This will bring computing into the world of Storage Class Memory that the company has been heralding for nearly a decade.  In IBM’s own words: “Storage-class memory (SCM) combines the benefits of a solid-state memory, such as high performance and robustness, with the archival capabilities and low cost of conventional hard-disk magnetic storage.”

PCM Is Not New

PCM is not a new technology, although it has never found its way into the mainstream.  The technology was first explored by Stanford Ovshinsky in the mid-1960s, and was used by the venerable Gordon Moore of Intel to produce a 256-bit research chip that was featured on the cover of Electronics Magazine in 1970.

The trouble with PCM is that it has always fallen between markets.  It’s too slow to replace standard DRAM, the memory used for all computers today, and it costs more than DRAM.  Researchers have continued to refine the technology, though, because it is universally understood that today’s leading technologies, DRAM and NAND flash, cannot continue to shrink to follow Moore’s Law for much longer.  Once either of these technologies reaches its “Scaling Limit” (the point at which shrinking no longer provides a cost advantage) an alternative technology like PCM should be able to fill the void, replacing established technologies.

Last July, Intel and Micron announced breakthroughs that would allow the two companies to produce their new 3D XPoint Memory (which Intel & Micron steadfastly deny is PCM, despite outsiders’ assertions to the contrary) at a cost below that of DRAM.  This would change everything.

While the Intel/Micron approach to cost reduction depends on producing a memory chip with multiple layers of bits stacked one on top of the other (thus the “3D” appellation), IBM has taken a much less costly approach of storing three bits on a single cell, thus tripling overall capacity.  This is done by programming the bit cell by varying degrees, something like shades of gray versus a simple black & white “1” or “0”. 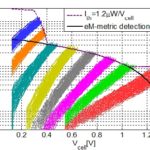 According to IBM, the trickiest part of this lies in the fact that the different programming levels drift over time and temperature, which would normally cause these different levels to be confused with one another.  (In the graphic at the top, the colored clusters represent individual bits of the IBM part at 25°C – room temperature.  The adjacent chart shows their drift with temperature at 70°C.)  IBM revealed an approach in its paper to compensate for these issues and allow reliable storage of three bits per cell with high endurance.

The performance data that IBM researchers shared with us proves that the chip can compensate for drift over time and temperature to provide data that is sufficiently reliable for computing applications.

The company is now looking for a partner to license the technology to bring it to market.

The world of computing is moving headlong into a model where a new memory layer will be fit between DRAM main memory and NAND flash SSDs.  This is the same phenomenon that occurred when NAND flash prices dropped below those of DRAM: SSDs became a new layer between HDDs and DRAM main memory.

The only challenge will be getting the price of PCM below that of DRAM.  Although this has been solved in theory, it will be more difficult in practice.  While Micron and Intel believe that they can achieve low enough costs by using the multiple layers of their 3D XPoint technology, IBM has developed a far more economical means of squeezing cost out of PCM with an approach that appears on the surface to be a better solution.

Neither technology will beat out DRAM manufacturing costs until one of them reaches a high enough volume to realize economies of scale.  Before then the market must be cultivated by selling PCM below cost.

No matter what, a new memory layer will find its way into all computers relatively soon.  As discussed in our report A Close Look at the Micron/Intel 3D XPoint Memory, Objective Analysis anticipates the first market for this technology to develop as a new memory layer in servers, since it will provide better cost/performance than can be achieved by simply adding DRAM.

Although it is a boon that the technology is persistent (that is, it retains data when power is lost) this is a feature that is not supported by today’s application programs, and will probably not be supported for a few more years.  It will be another few years after that before such software gains enough popularity to become prominent.  We do not see persistence as a key selling point for now, but instead expect for price/performance to be the leading driver for mass adoption.

6 thoughts on “IBM Jumps on the “New Memory” Bandwagon”