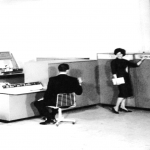 Before there was DRAM (1969, Bob Dennard) or SRAM (1963, Robert H. Norman) there was another little-known random-access memory from computer maker NCR that was known as CRAM.  The Memory Guy only recently learned of this technology thanks to a relative’s visit to the NCR Collection in the Dayton History Museum in Dayton, Ohio.

CRAM, a magnetic technology, was a vital part of the NCR 315 Computer System (pictured above) in 1961.  The acronym stands for “Card Random-Access Memory”.  It employed cartridges of magnetic cards each of which could be attached to a spinning drum to rapidly access small amounts of data.  The cartridges were quick to mount and unmount, to give the system unlimited capacity. 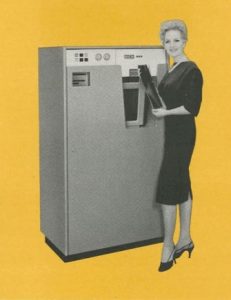 NCR boasts that this new memory allowed a system to be used in a different way, placing “Inquiry Stations” (Teletypes) at strategic locations within a bank or production facility to allow managers to access data in real time, even from hundreds of miles away.  In 1961 that was a breakthrough! 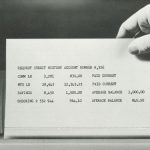 The sign in front of the museum’s CRAM display says:

In 1961, NCR continued to pioneer uses for magnetic strip technology, first developed for the Post-Tronic, when it introduced Card Random Access Memory (CRAM) as part of its new 315 computer system. CRAM was one of the first truly random access memory peripherals available in the computer industry, and represented a major departure from the magnetic tape drives and drum memory that was common at the time. The CRAM used removable cartridges which held 256 cards. Each of these cards had seven magnetic strips capable of storing 21 KB of information, and any of the cards could be accessed in a random manner in less than a sixth of a second. Each cartridge could hold up to 5.5 MB of information, and could easily be switched with another cartridge in a minute, giving unlimited offline storage. The 315 computer was capable of controlling up to 16 CRAM units for a total online storage capacity of 88 MB. Being able to randomly access information so quickly created new opportunities for banking and other businesses. For example, with a CRAM unit it was now possible for a bank teller to automatically update a customer’s account in real time, both in the same office as the computer or in a branch hundreds of miles away. This ability paved the way for things we take for granted today such as credit cards or using an ATM to access our bank account.

The Computer History Museum even has a sales brochure on NCR’s CRAM.

It’s always amazing to look back some sixty years and see just how much progress computers have made in that time.  Random-access memories have always been valued, and designers needed to go to great lengths to provide this kind of data availability before integrated circuits made RAMs inexpensive.