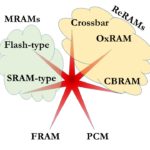 There has been a lot of discussion in the trade press lately about new memory technologies.  This is with good reason: Existing memory technologies are approaching a limit after which bits can’t be shrunk any smaller, and that limit would put an end to Moore’s Law.

But there are even more compelling reasons for certain applications to convert from today’s leading technologies (like NAND flash, DRAM, NOR flash, SRAM, and EEPROM) to one of these new technologies, and that is the fact that the newer technologies all provide considerable energy savings in computing environments.

Objective Analysis has just published a white paper that can be downloaded for free which addresses a number of these technologies.  The white paper explains why energy is wasted with today’s technologies and how these new memory types can dramatically reduce energy consumption.

It also provides a mini review of a number of currently-available or upcoming new memory alternatives including:

Something consistent about all of them is that they are nonvolatile, so they don’t need to be refreshed like DRAM, they use faster and lower-energy write mechanisms than either NAND or NOR flash, and their memory cells can be shrunk smaller than current memory technologies’ scaling limits, which means that they should eventually be priced lower than today’s memory chips.

Have a look – it’s free.  The Memory Guy always finds such a price to be compelling!