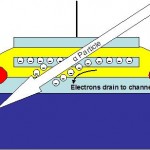 The problem with space is that there is a lot of radiation.  Radiation on the earth’s surface is lower because it is stopped by the atmosphere, but in space there is an abundance of radiation that interferes with most semiconductors.  Radiation is also a concern in certain medical applications where a memory must maintain its contents while undergoing sterilization through irradiation.  Experiments on conventional flash memories have shown data loss at only 2% of the radiation dose typically applied during a routine sterilization process.

Most memories (and, to a lesser degree, logic) are sensitive to radiation because it can leak a charge off of a floating gate causing the gate’s state to change.  This is called a “Soft Error” since this type of bit failure is inconsistent – a “Hard Error” always fails the same way.  Radiation causes soft errors in any charge-based memory technology: DRAM, flash (NAND and NOR), SRAM, EEPROM, and EPROM. 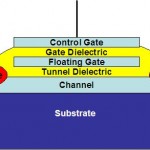 To understand this let’s consider a typical flash memory bit cell, shown to the left.  A bit is stored by moving electrons onto the floating gate where they are stored. When the cell is accessed by driving a current through the channel then a larger or smaller current will flow through the channel depending on whether or not any electrons have been stored on the control gate.  This determines the cell’s state – whether it is a “0” or a “1”.

This post’s first graphic shows what happens when an alpha particle passes through the bit cell: It drags electrons off of the floating gate and into the channel to permanently change the bit’s state.  This will happen in any floating gate technology (NAND or NOR flash, EEPROM, and EPROM), in DRAM by eliminating the charge on a bit’s capacitor, or in an SRAM by removing the voltage on one of the transistors in the cell’s flip-flop causing it to become unstable.

Other memory technologies’ bits are insensitive to radiation.  These are mask ROM, fusible-link PROM, MRAM (including STT), FRAM, PCM, RRAM (including memristors), and carbon nanotubes.  Since there is no stored charge in any of these technologies, an alpha particle is not capable of dragging the charge out of the cell.

The most readily-available of these technologies is MRAM from Everspin, Honeywell, and Aeroflex.  Mask ROM is becoming relatively rare and is very expensive unless you purchase hundreds of thousands of chips that all contain the same program.  Fusible-link PROM is a very old technology and is only shipped in extremely low densities.  I believe that PCM is still supported a little by Micron, but you will probably have trouble getting it from BAE (who specializes in space-qualified versions), STmicroelectronics, Intel, and Samsung.  Cypress Semiconductor and Fujitsu sell low-density FRAM.  Adesto alone sells an RRAM, which the company calls “CBRAM”.

These companies all understand the advantage that their products hold in high-radiation applications like medical devices.  In August Adesto announced that its CBRAM maintains its stored data during the harsh irradiation conditions imposed by the sterilization processes used in medical device manufacturing.  These processes exceed dose levels of 50 kGy gamma and E-Beam radiation.  Adesto’s management expects to be able to sell its sterilizable CBRAM into applications like wearable electronics, orthopedics, smart syringes & sample containers, and surgical devices that must be sterilized before re-use.  The chip will be used to store boot code and reference & calibration data for RFID bio-material tracking, drug delivery and capsule-endoscopy.

Although  the development of these new technologies has been funded by investors who anticipate the eventual demise of DRAM or flash memory, the technologies’ near-term markets will be niche applications that can trade off a higher price against some unusual benefit, like radiation tolerance.  Because of this, most new technologies are being studied very carefully, but are not widely available.  Some day they will replace flash and DRAM.