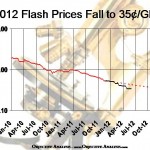 Last January at the Storage Visions Conference in Las Vegas (held every year just prior to CES) I asked the audience what they would do when NAND flash reached a price of 35¢ per gigabyte.  My projection (the dotted red line on the chart at left) was that prices would reach that level by the end of the year.

My audience was shocked to hear such a low price!

Price declines open up new markets.  It was time to think creatively, I said, because that’s where pricing would be by the end of 2012.

Well, I was wrong – according to spot-market watcher InSpectrum NAND chip prices have already reached that level (the black line on the chart.)  A competing firm, DRAMexchange claims that chip prices are no lower than 41¢/GB, but that microSD cards are going for as little as 29.5¢/GB.

How low can prices go?  Objective Analysis‘ cost model estimates that to reach 35¢/GB a manufacturer would either need to be using a 24nm (or smaller) process to manufacture TLC flash or a 20nm (or smaller) process with MLC.  Given that the market acceptance of TLC has been relatively low outside of SanDisk this puts a lot of pressure on NAND flash makers whose processes are not all that aggressive.

SanDisk and Toshiba are arguably at 19nm, although their competitors are quick to point out that 19nm is the tighter dimension of an asymmetrical cell.  Intel and Micron ship product with a symmetrical cell built on a 20nm process.  The others, Hynix and Samsung have not yet entered production with competing processes.

Although the NAND flash market is not garnering the attention that DRAM is, owing to last year’s dramatic price collapse and Elpida’s bankruptcy, the NAND market is indeed oversupplied and prices are depressed.

While that might pose difficulties for NAND flash makers, it opens up new opportunities for NAND users.  It is indeed time to think creatively: How would you use 35¢/GB NAND?

For those who would like to gain a better understanding of NAND flash, the fastest growing market in the history of semiconductors, Objective Analysis recommends the report: Understanding the NAND Market, which can be purchased for immediate download from our website.

2 thoughts on “NAND Flash at 35 Cents per Gigabyte”