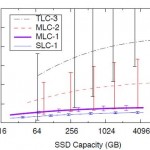 A few articles at Computerworld,  Tom’s Hardware, and The Verge were recently passed my way.  These reported on a paper presented at last week’s USENIX conference that predicted how NAND flash’s future performance declines would impact tomorrow’s SSDs.

The paper found that SSD performance is likely to decrease over time as SSDs increase in capacity.  The report postulates that SSDs of the future: “may be too slow and unreliable to be competitive against disks of similar cost in enterprise applications.”

Sadly, the Tom’s Hardware and Verge articles focused more on one of the assumptions behind the paper than on the paper’s research and conclusion, taking aim at the notion that NAND flash would cease scaling by 2024.  This was something the authors took from the ITRS Roadmap and was used only as a reference point.  The paper projects what flash performance will be like in 2024 if the technology follows historical endurance, retention, and performance declines as it approaches that year.  The historical figures were actually measured by the researchers on an existing PCIe SSD using 45 NAND flash chips of different process technologies and bits per cell.

The only concern that I have with this research are two very fundamental underlying assumptions:

If the SSD market grows large enough then NAND makers will be able to justify the development of special NAND chips optimized not for MP3 and photo files, as they currently are, but optimized instead for storage applications.  Interfaces like ONFi and Toggle Mode are a small step in this direction.  As for SSD topology, this is highly likely to undergo significant changes given the immaturity of the technology.

No doubt NAND will undergo further changes to harness the very high internal bandwidth inherent to memory chips, maybe even something as exotic as the Hybrid Memory Cube.

Perhaps this paper will be a wake-up call to the industry: Something has to change to keep SSDs on a pace of increasing performance.

Call me in 2024 and we can talk about whether or not the paper’s projection indeed did occur.