In this fourth part of a five-part series, contributor Ron Neale continues his analysis of selector technologies, focusing on the nature of the mystery of Forming and a number of the many unanswered questions.

From the discussion and investigations outlined in the earlier parts of this series, there would appear to be a number of options to explain selector Forming, where on the first switching event the threshold switching voltage decreases from a virgin value to some significantly lower operating value. I have provided tentative explanations based on percolation paths formed from islands of a different conducting phase, composition changes in the direction of current flow and contact effects, or some combination of all or any of those effects.

I will now move on to three new efforts:

For the purposes of discussion I will illustrate two models for Forming which might be used to account for the difference between selector Forming voltage (Vf) and the operating threshold voltage (Vo). 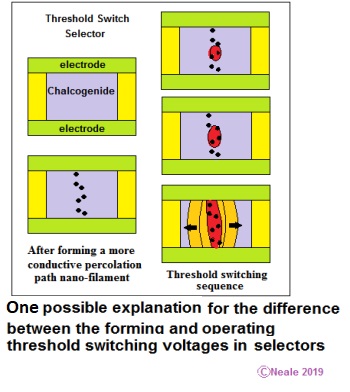 The first model, illustrated above, is one in which the act of Forming results in a lower-resistance initiating or percolation path which bridges all or part of the inter-electrode gap. In this model the result of Forming would be a permanent percolation path of highly conducting nano-sized metallic-like structures, or sites of clusters of the metallic bonding of the new incipient metals. Those changes would occur in the region of the initial high current density pulse illustrated in the all-purpose model, presented in the third figure of Part 3, which I will repeat below. 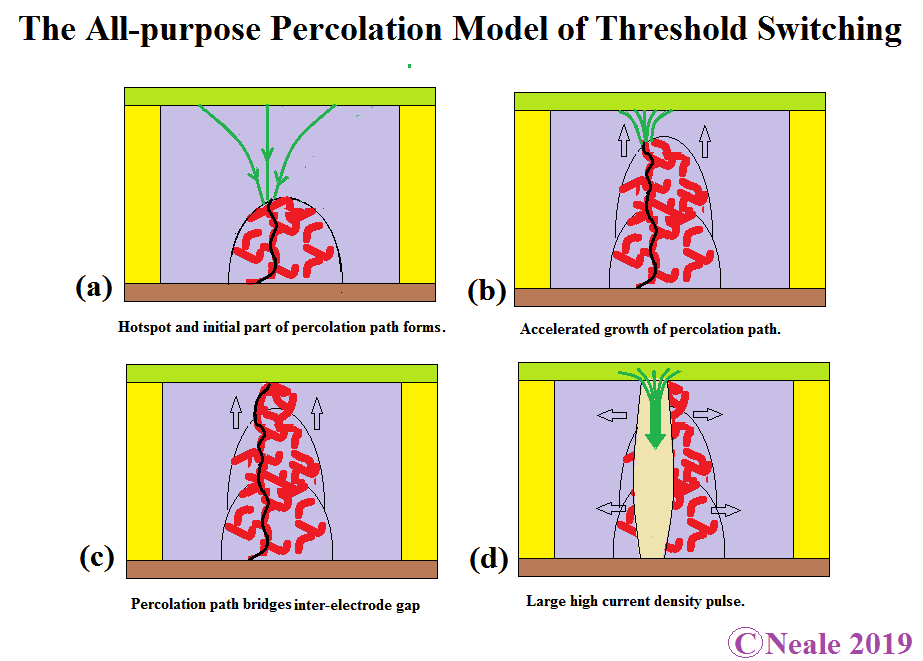 The permanent percolation path would act to provide lower threshold voltage (Vo) and act to thermally initiate threshold switching in the rest of the material. Until the area of the selector is scaled to a dimension similar to the diameter of the percolation path its size would only make a very small difference by way of an increase in the off-state leakage resistance between a device in the “As Fabricated” and Formed states.

For such a device threshold switching after Forming would initially start from a hotspot and progress towards the electrodes, switching a series of links between the conducting regions of the percolation path (as illustrated in the first figure) until the inter-electrode gap was bridged, from which point rapid radial expansion of the conducting region would then accommodate the applied current without incurring any damage.

The problem with such a model is that the process of Forming these permanent nano-inclusions of high electrical conductivity would have to be a self-limiting process or failures of the type discussed for PCMs earlier in Part 3 would occur. Again the lowest common denominator question applies: That self-limiting capability would have to be a property of all of the millions of possible chalcogenide-based selector and memory material compositions which have the ability to threshold switch and require forming. The saving grace might be found in a paper by Kalb who found that some PCM materials appear to have a limit to the number of possible nucleating sites. (Atomic force microscopy measurements of crystal nucleation and growth rates in thin films of amorphous Te alloys, J. Kalb and F. Spaepen, M. Wuttig, Harvard University, Aachen Institute of Physics, Applied Physics Letters Vol 84, No 25, 21 June 2004)

A second model, shown below, is one where Forming causes either a surface reaction between the active selector material and the electrode or, as the result of element separation, a region of permanently conducting material is deposited on the electrode’s surface either as the result of reaction with the electrode material or from crystallization. In a sense this is very much as though part of the structure is acting like a one-time programmable (OTP) anti-fuse or a programmable via in series with the remaining switching material. 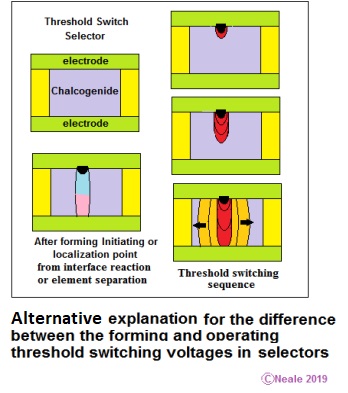 The changes which occur in OTP anti-fuses or vias might be considered a pointer to one possible process of Forming. In similar sized device structures, voltages and currents similar to those used to switch chalcogenide selectors and PCMs can transform a material like amorphous silicon layered on a tungsten electrode into a conducting alloy of tungsten and silicon.

In operation, when a voltage is applied to a Formed device of the type illustrated in this figure the highly conducting region on the surface would act to localise the field and create a hotspot from which the conducting region would expand.  This expansion would begin in the direction of the current before the transition and then expand radially during and after the transition, all of which could be achieved using a voltage lower than the original Forming voltage to switch the device.

In the above figure the two-colour region shown below the initiating point illustrates the change in composition in the direction of current flow caused by element separation. Even if the material from that central core region is not used to create the initiating point those changes in composition alone could account for the localised threshold voltage change which occurs as a result of Forming and offer a third alternative explanation for the result of Forming.

For both models illustrated above the threshold switching voltage associated with the single Forming cycle in the As-Fabricated device occurs without benefit of the permanent percolation paths and therefore requires a higher Forming voltage.  Any structural change needed to create the permanent percolation path would be created (or Formed) during the first threshold switching cycle in or around the hot core region.

Advocates of a purely electronic model versus those supporting a pure thermal effects model will want to account for post-threshold switching conduction.  The models of a now-Formed device presented above are able to deal with both cases. For those advocating a purely electronic or mixed thermal-electronic model will reason that the expansion of the conducting column is caused by thermal lowering of the threshold voltage of the selector material adjacent to the initial hot conducting filament. Thermal advocates will see that the heating and raising the temperature of thin layers of the material around the core makes it energetically more efficient to form concentric conducting paths at approximately the same temperature for the filament expansion than it would be to heat the whole volume of the filament (that is, after a discontinuity in electrical conductivity between the amorphous material and the molten state has occurred).

In both of my speculative Forming models, the conducting filament has expanded from the high voltage initiating path and its I-V characteristics are now dominated by contact with the electrodes.  This means that any contact-junction effects between the electrode and the enlarged conducting filament might be considered as the possible reason for the constant-voltage term in the equation for the conducting state resistance:

where Vc is a constant-voltage term, I is the current, and Rser is any series resistance.

Admittedly, a constant-voltage term could also be interpreted as the signature of a constant current-density filament. Also in both of these speculative models of Forming the radial expansion of the conducting filament acts as a cushion and prevents fuse-like destruction.  This cushioning is the reason that threshold switching in chalcogenide glasses is often described as soft dielectric breakdown or self-compliant dielectric switching.  This expansion phenomenon comes to a halt when either limited by the amount of available current to drive it or the radial dimensions of the device structure limit any further expansion of the current-carrying filament.

If these are accurate models it means that Forming does not represent a bulk change but a very localised change. The result of Forming, and of any resulting lower-resistance initiating path, would be expected to have only marginal effect on the low-voltage pre-switching leakage current of the Formed device, increasing it only slightly, as is actually observed.

The simple test would be to plot Forming voltage as a function of thickness. For a bulk effect the result would be a line passing through the axis at the zero points. If it did not and there was some offset then that would be an indication of a non-bulk effect of some type. The percolation model would be expected to scale with thickness, i.e. the length of the percolation path would scale with thickness if the number of nano-conducting structures is constant per unit length.

I again contacted Anthonin Verdy of CEA LETI and asked if they had performed such an experiment after the recent publication/presentation of the two Leti works.  (Tunable Performances in OTS Selectors Thanks to Ge3Se7-As2Te3, A. Verdy, et al, 2019 IEEE 11th International Memory Workshop (IMW) Monterey.  Optimized Reading Window for Crossbar Arrays Thanks to Ge-Se-Sb-N-based OTS Selectors, A. Verdy, et al, 2018 IEEE International Electron Devices Meeting)

He emailed the following reply:

“In the paper I presented at the International Memory Workshop, we showed show that:

Also in the very detailed selector analysis of Te-based chalcogenide materials for selector applications, (A. Velea, et al, Nature Scientific Reports, 2017) the authors stated that their work was performed on fresh (unoperated) selector samples, as a means of comparing like-with-like.  This implies that changes of some type would be observed for operated devices. The paper did not specifically discuss or mention Forming.

This post is the fourth  part of a five-part series on 2-terminal chalcogenide-based memory selectors and Forming authored by Ron Neale and published in The Memory Guy blog in February-November 2019.  The links below will take you to each part of the series: