In this second part of a five-part series contributor Ron Neale continues his analysis of selector technologies focusing the nature of the mystery of Forming and a number of the many unanswered questions.

Thin film selectors, or memory matrix isolation devices, based on chalcogenide glasses, would appear to be the devices of choice as non-volatile memory arrays move towards 3D stacked structures. Considerable progress has been made in finding selector compositions which can be doped to provide a suitable level of structural stability required for the NV memory array application.  These were discussed in the first part of this series.

However, there is one known unknown in relation to this type of selector and it is the need for Forming, with the unknown being the physical nature of the changes which occur within the device as a result of the Forming process and any implications those changes might have on reliability and performance. The outward manifestation of Forming is a change in threshold voltage from an initial value to some lower more constant operating value. Not just a minor threshold voltage change but a significant one, a reduction of the order 36% in some cases.

The diagram below illustrates how Forming fits into the phase change memory array picture for selectors and PCMs, with selectors on the right and PCMs on the left. The common activity is at the intersection of the colours. 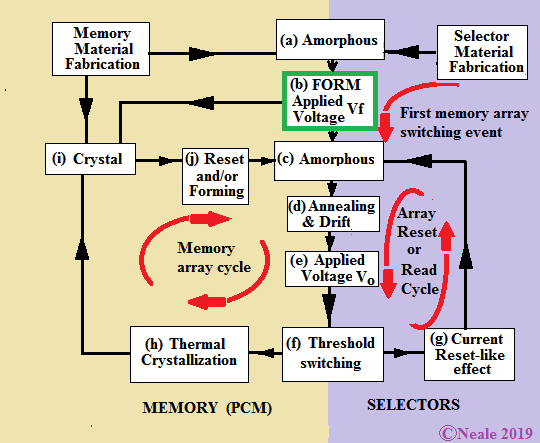 As the upper part of the diagram illustrates in (box a), selectors and PCM devices can both be fabricated in the amorphous state. Although when incorporated in a memory array and to avoid the need of the higher voltage for Forming, planar PCM bits are fabricated in the crystalline state (box i). In addition it is not possible to fabricate the popular “dome” type PCM structure in the amorphous state.

Because in PCM memory arrays selectors must be formed in the amorphous state, the problems of the requirement for higher Forming voltage (Vf also called by some Vfire) must be dealt with by circuit engineering, or methods must be found to reduce it.

As this diagram further illustrates after selectors have been Formed (box b) there is what might be described as a second amorphous state with a lower threshold voltage (box c): the operating voltage (Vo also called by some Vth). For the PCM as shown on the left-hand side of the  diagram, which are fabricated in the crystalline state (box i), we must assume that any Forming-related structural changes are dealt with during the first reset pulse (box j).

It is well established that for PCMs in the second post-Forming amorphous reset state, annealing or structural relaxation occurs (box d), which causes the threshold voltage and resistance to move towards higher values. In the memory array cycles, indicated by the red cyclic arrows in the diagram, I also show for selectors that threshold switching has disturbed the annealed state (box g) and returned it to its pre-annealed second amorphous state (box c).

Part of the processing of selectors involves long-time high temperature anneal and it is difficult to find in the literature much evidence of room temperature post-threshold switching annealing of selectors. Not even that is for selectors used in memory arrays where the selector will have conducted the higher current of the reset pulse and where a maximum of structural disturbance would be expected. I raised this question with Anthonin Verdy of CEA-Leti, France, a leading structure analyst who has carried out extensive work on selectors, and he replied:

We observe threshold voltage drift on our OTS devices. The amplitude of the drift is composition-dependent. For some compositions very low drift (~0) can be measured. However, we never see the saturation of the threshold voltage with the time, mainly due to the long measurement time required.

There are many questions in relation to Forming and finding the answers to those questions would be helped if there was a complete and agreed understanding of threshold switching and why it is observed in a number of amorphous materials of different compositions almost impossible to count. What is the common denominator?

There are three types of threshold switching events.  They are:

Then there are the questions of timing: When exactly in the single threshold switching Forming cycle does the change occur?  Is it:

The final set of questions is: What and where do the Forming changes occur?  Are they the result of: 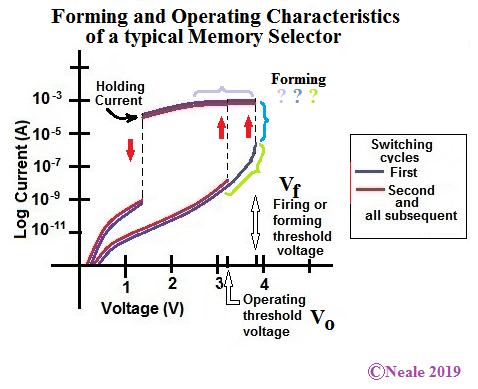 Coloured brackets highlight the three options for the locations where the Forming-related changes might occur.   The first (green bracket) is the pre-switching region between the operating threshold voltage (Vo) and the Forming or threshold voltage (Vf). One point worth noting is the instantaneous power between Forming and operating threshold voltage differs by a factor of ~ 100. The second possible location (blue bracket) is during the rapid transition to the conducting state. While the third is after switching (purple bracket) when the device is in its conducting state.

After the switching transient the conducting current-voltage (I-V) characteristics are the same for both the Forming cycle and subsequent operation switching cycles which might suggest any permanent structural changes associated with Forming have already occurred.

It is obvious, the key to any assessment of what is possible during Forming requires a very clear and accurate understanding of threshold switching. In Part 3 of this series of articles I will explore possible links between the many and varied descriptions of threshold switching and Forming. Then move on to some Forming models plus  some of speculative invention which might solve any Forming problems.

This post is the second part of a five-part series on 2-terminal chalcogenide-based memory selectors and Forming authored by Ron Neale and published in The Memory Guy blog in February-November 2019.  The links below will take you to each part of the series: