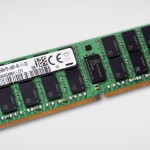 The Memory Guy asked Samsung whether the data buffer chip within the DRAM packages replaces the external buffer on a standard RDIMM, to which the company replied that the module still requires a central register buffer for “on-DIMM” command buffering.

What about power?  I also asked Samsung about this, since the press release doesn’t say much except that the power is 50% that of 64GB LRDIMMs (by which they probably mean that one 128GB RDIMM uses half the power of two 64GB LRDIMMs).  It’s reasonable to assume that all 144 DRAM chips will be fully active at all times, and with standard DDR4 DRAMs that would lead to pretty significant power dissipation.  Samsung replied that the use of TSVs reduces I/O power significantly.  The signals from the DRAM chips to the base logic chip go only a tiny distance and have very small capacitive loading due to their small size.  The DIMM’s interconnections are driven by the logic chip at the bottom of each stack, and logic chips can drive a signal line more efficiently than can memory chips.  Once again, since the logic chip is driving TSVs on the DRAM side less power is dissipated than in a more standard configuration in which buffers drove DDR4 chips on one side and DIMM signals to the external buffer on the other side.

Another thing that was (naturally) not mentioned in the release was the price.  Since this product is the first of its kind, Samsung can charge a premium.  I would not be surprised to hear that these were selling for $2,000-$4,000, but an even higher price could be justified.  I have heard that the TSV process increases wafer processing costs by about 35%, so part of this mark-up would stem from the cost to process the TSVs.

This is an impressive use of stacking technology to provide a product that will doubtlessly be highly valued by an elite niche of processing applications like large in-memory databases.