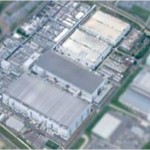 SanDisk today announced that its joint venture with Toshiba would begin construction in August of its Fab 5 “phase two” shell.  Completion of this Yokkaichi, Japan wafer fabrication facility is slated for mid-2014.

SanDisk expects to use this facility for technology transitions of existing Yokkaichi wafer capacity.  The new clean room will provide the space for the additional equipment necessary to transition existing wafer capacity to next-generation 2D NAND technologies and to early generations of 3D NAND technology.  In this way it will perform support for Fab 3, Fab 4 and phase one of Fab 5.

This is consistent with the JV’s use ofits existing facilities: Underground tunnels use monorails to automatically shuttle wafers back and forth between these fabs as if the facility were a single very large fabrication plant.  Fab 5 phase two will simply add floor space to this existing gigantic facility.

The timing of this expansion is reassuring to us at Objective Analysis.  For the past two years we have forecast that capital spending would surge in the second half of 2013.  Here we are on the second day of the second half, and the first such announcement has been made.

SanDisk already produces 7,000 wafers every day of the year, yielding 3 million dice, that are built into 2 million cards, USB drives, SSDs, and other products.  It would be reasonable to expect for this addition to increase those numbers by as much as 25%.