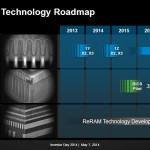 The single most interesting thing I learned at the 2015 Flash Memory Summit was that 3D NAND doesn’t have a natural limit, after which some other memory type will need to be adopted.

For years SanDisk has been presenting a memory roadmap (this post’s graphic is one rendition) that anticipates a move to ReRAM after 3D NAND has run through its natural life, which was expected to be as little as three generations.  This has been backed by the idea that a 3D NAND stack would only be able to reach a certain number of layers before it would encounter difficulties caused by the need to etch a high aspect ratio hole through an increasing number of layers.

These high aspect ratios were thought to be the limiting factor that would prevent 3D NAND from continuing for more than three generations.  3D NAND could only have as many layers as the aspect ratio could support.

On a panel that I moderated at this year’s Flash Memory Summit one panelist, Dr. Myoung Kwan Cho of SK hynix, explained that although there is a limit END_OF_DOCUMENT_TOKEN_TO_BE_REPLACED 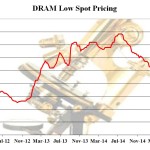 So even though today’s END_OF_DOCUMENT_TOKEN_TO_BE_REPLACED 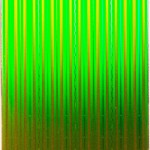 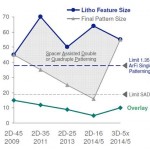 NAND flash is the process leader in memory technology, and this puts it in a very challenging position: It must ramp to high volume production using techniques that have never been tried before.

The graphic for this post (click to enlarge), supplied by ASML, the semiconductor industry’s leading lithography tool supplier, illustrates the challenge of migrating from one process node to the next.  Across the bottom, on the X-axis, are representative process nodes ranging from “2D-45”, or two-dimensional (planar) 45nm NAND, to “3D-5x”, or three-dimensional 5xnm NAND.  Below these numbers are the year of volume production.

Every so often something very strange happens that puzzles The Memory Guy.  On December 29 (or Dec. 30 in Seoul) something odd occurred.

I received two e-mails, one from SK hynix at 3:55 PM Pacific Time, and one from Samsung exactly one hour later.  Both were press releases.

The SK hynix release was titled: “SK Hynix Developed the World’s First Next Generation Mobile Memory LPDDR4”.  It announced that the company is sampling its 20nm-class 8Gb LPDDR4 DRAM to customers.

The Samsung release was END_OF_DOCUMENT_TOKEN_TO_BE_REPLACED 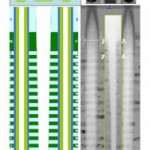 The following is excerpted from an Objective Analysis Alert that can be downloaded from the company’s website.

Rambus and Micron announced on Tuesday that they have signed a patent cross license agreement.  Micron receives rights to Rambus IC patents, including memories.  Both Micron and Elpida products will be covered.  The companies have thus settled all outstanding patent and antitrust claims in their 13-year court battle.

Micron will make royalty payments to Rambus of up to $10 million per quarter over the next seven years, totaling $280 million, after which Micron will receive a perpetual, paid-up license.

Rambus and Micron both have END_OF_DOCUMENT_TOKEN_TO_BE_REPLACED 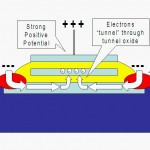 Some of my readers have asked: “How is 3D NAND programmed and erased?  Is it any different from planar NAND?”

(Before I get too far into this allow me to admit that The Memory Guy doesn’t understand quantum physics, so I will be presenting this only to the depth that I understand it.  There will be no band-gap diagrams or equations to wrestle with.)

Both 3D NAND and planar NAND use Fowler Nordheim Tunneling (FN) to both program and erase.  This differs from NOR flash which programs bits using END_OF_DOCUMENT_TOKEN_TO_BE_REPLACED 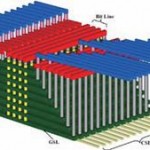 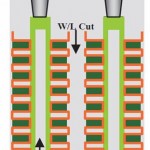 Part of this stems from the use of a different kind of NAND bit cell.  You can shrink flash cells smaller if you use a high-k gate dielectric (one with a high dielectric constant “k”) since it END_OF_DOCUMENT_TOKEN_TO_BE_REPLACED