In a comment to a recent Memory Guy post I stated that NAND flash can reduce DRAM requirements, even in PCs.  Some readers have told me that they wonder how this could be, so I will write this post to explain.

Some years ago Objective Analysis noticed that clever server administrators were able to use SSDs to reduce their systems’ DRAM requirements.  Not only did this save them money, but it lowered power and cooling requirements as well.

Thinking that this might work on other kinds of computers, we commissioned a number of benchmarks to be performed on a PC.

In every case the minimum amount of DRAM was very small.

This benchmark data was compiled, written up, and explained in depth in the report: How PC NAND Will Undermine DRAM, which can END_OF_DOCUMENT_TOKEN_TO_BE_REPLACED 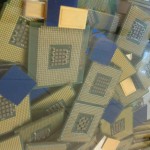 Last week Micron and IBM announced that Micron would be IBM’s main supplier of NAND flash chips.  The week before Micron announced a strategic agreement with Seagate to supply NAND flash. Why all this activity?

It comes down to today’s budding NAND flash shortage and the fact that suppliers tend to groom their customer lists when supplies get short.

Neither IBM nor Seagate represent the enormous opportunities that major consumer electronics firms like Apple do.  Since many NAND suppliers are very cost-focused they look for customers that need very little support and purchase in high volumes.

IBM and Seagate look for a lot of support, and, since they both ship mostly enterprise flash systems or SSDs, they consume relatively small unit volumes of NAND flash chips.

These companies need to have an understanding of END_OF_DOCUMENT_TOKEN_TO_BE_REPLACED

It seems that DRAM makers are still unaware of the impact NAND flash will have on DRAM revenues.  Even though many are paying a lot of attention to the impact of the Tablet PC on Notebook PC shipments, few understand that even a healthy notebook market will start to place a decreasing focus on the system DRAM in the near future.

The reason why is simple, and it’s explained in great detail in a report: How PC NAND will Undermine DRAM.  In a nutshell, once a basic minimum DRAM requirement has been met, NAND flash yields a greater performance return per dollar than does DRAM.  This is illustrated in the graphic to the left.

Forget about the fact that NAND flash is nonvolatile, and that it offers END_OF_DOCUMENT_TOKEN_TO_BE_REPLACED