This concept is illustrated by this post’s first graphic, which was provided by Applied Materials.  (Click on the graphic to see the whole thing at a larger size.)  A standard NAND string that normally runs longitudinally is turned on its end to become a vertical string.  Not only that, but it makes things easier if the string is split into two sections and END_OF_DOCUMENT_TOKEN_TO_BE_REPLACED 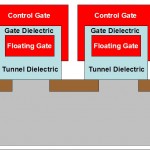 Flash has always been expected to reach a scaling limit. Over the past few generations technologists have developed END_OF_DOCUMENT_TOKEN_TO_BE_REPLACED