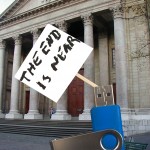 When will it happen?

One thing that is quite clear is that nobody knows when NAND flash will stop scaling.  Everyone knows that it’s soon, but researchers continue to find ways to push the technology another couple of process nodes past where anyone thought it could possibly go, and they have been doing this since the early part of this century.  At the Intel Developer Forum in 2003 Intel made a presentation asserting that flash would not scale past the 60nm process node and outlined alternatives that the company was then exploring.

Since that presentation Intel has produced 50nm, 35nm, 25nm, and 20nm NAND flash – four generations below 60nm – and has hinted that the company has a roadmap to allow it to produce NAND flash for at least two process generations below 20nm.  The Memory Guy would not be at all surprised to find that NAND was pushed farther than this, perhaps becoming manufacturable at sub-10nm processes.

What comes after NAND flash?

If NAND flash continues to defy scaling limits then any successor technology has that much more time to become understood.  This also gives new, unheard-of technologies an opportunity to rise to displace those technologies that today appear to have the best chance of succeeding NAND flash.

This means that even the strongest candidate today cannot be guaranteed to be in the best position once flash finally stops scaling.  In other words: Nobody knows what will replace NAND flash.  It could be any of today’s contenders: PCM, MRAM, FRAM, or even RRAM, or it could be some technology that has not yet produced prototypes like carbon nanotubes or some organic compound.

Whenever the change occurs, some technology whose wafer processing cost is higher than that of NAND will be able to scale one or two nodes farther than NAND so that its chip cost will be lower than that of NAND even with a higher wafer cost.  Little other than cost matters to the world of memory, so the displacing technology will not see much of a market up to that point, and it will obliterate the NAND flash market soon after that point has been reached.

Memory is an “All or Nothing” game.

What impact will the change have?

To the end user nothing will change.  They will replace their 512GB iPhone with a 1TB model without realizing that the memory technology inside the two phones is radically different.

Objective Analysis expects for the price trajectory of the new technology to continue to follow the Moore’s Law price curves, with the transition creating a mild bump in the road – nothing more.

Perhaps the most profound impact will be felt by designers of SSD controllers.  These people, absolute geniuses to my understanding, have finely-tuned repertoires and a deep understanding of how to hide all the foibles of NAND flash: Error correction, write acceleration, wear leveling, background garbage collection, etc.  All of these fine techniques are likely to suddenlybecome  altogether unnecessary, and these highly-qualified specialists will suddenly find themselves out of a job.

Yes, NAND flash’s end is near (as our visual shows) and it may continue to be near for quite a while longer.  When it does reach the end of scaling, expect for the same companies who now make NAND flash to dominate the market for whichever technology or technologies eventually replace the world’s fastest-growing semiconductor technology.

[As a postscript: The Memory Guy was looking for inspiration for the photo above, and ran into a number of fun cartoons showing guys holding placards that say: “The End Is Near!”  Click on the link sometime when your boss isn’t watching and nobody is likely to hear your laughter!]

6 thoughts on “The End of Flash Scaling”