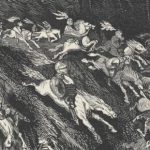 Starting with Micron’s most recent earnings call The Memory Guy has been hearing memory executives and others use the word “Unprecedented” to describe today’s market collapse.  Perhaps the strangest of these was an article in the Storage Newsletter that said that the current situation was “Unprecedented since 2008.”  Given that “Unprecedented” means that nothing like this has ever happened before, that’s a pretty strange thing to say.

Being a numbers guy, I decided to see just how unprecedented today’s collapse has been.  Drawing from numbers reported by WSTS, I plotted the price per gigabyte declines for as many collapses as I could find over the reported history of the DRAM and NAND flash markets.  This Memory Guy blog post shares what I learned.

The charts below show how prices have fallen in a unique way.  Each of the lines begins during a month when a price reached a peak before a subsequent fall.  The line is named after that month, so 11/95 is the collapse after the price peaked in November of 1995.  The data points have been normalized to that month, so each line begins at 100%.  The line ends when prices rise or stabilize, except for the current fall, which ends when we run out of data. 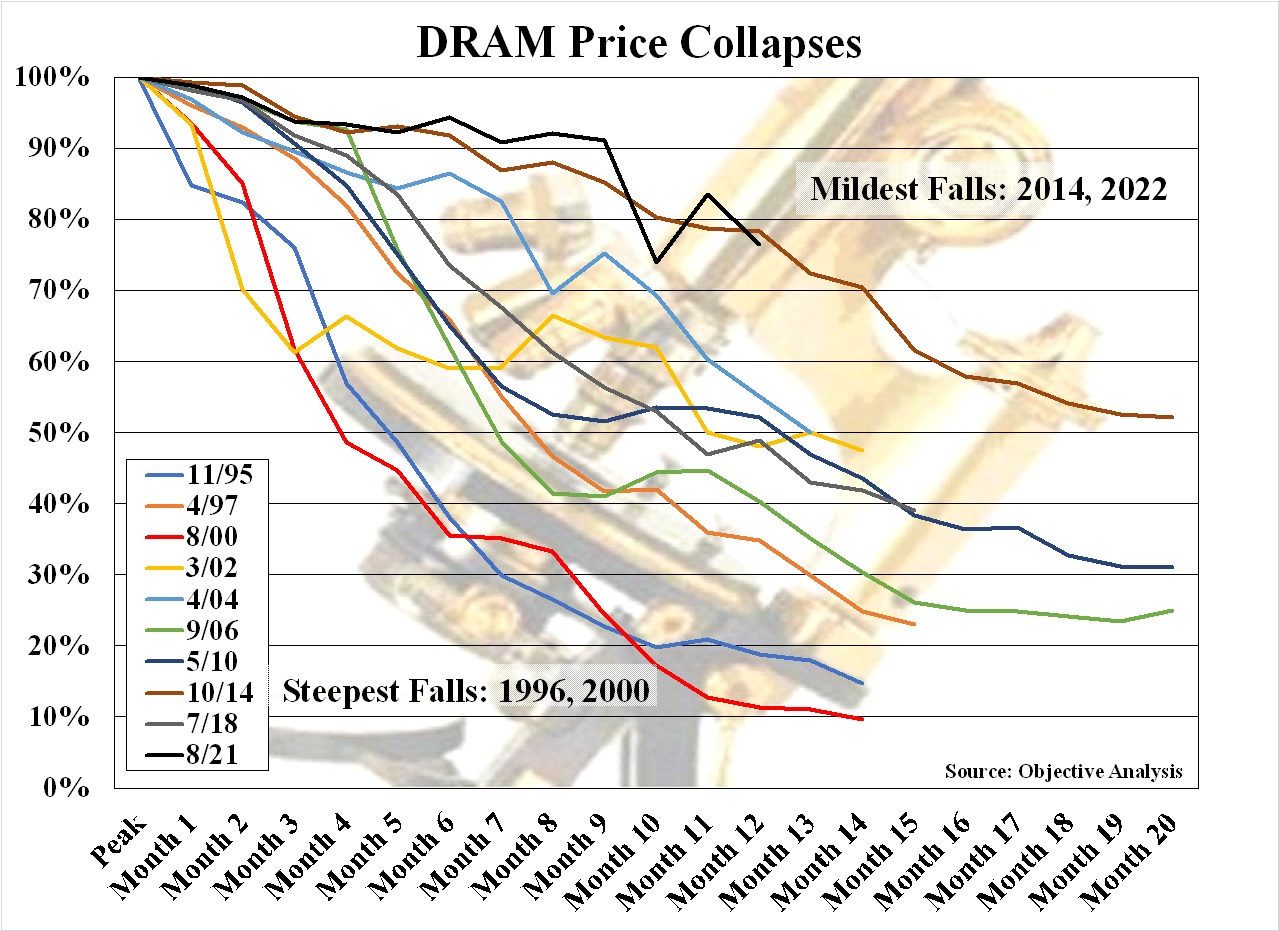 You can see that the lines at the bottom of the chart occurred when the market experienced its steepest price drops.  The red and blue lines at the bottom, representing 1996 and 2000, were the two worst collapses since WSTS began reporting detailed DRAM data in 1993.

It’s pretty amazing to consider that DRAM prices in August of 2001 were only 11% of what they were in August 2000!  Frightening, too!  That was the Internet Bubble Burst.

The lines at the top of the chart represent 2014, and the current 2022 collapse.  These are the most gentle price falls in the same history.  The current collapse is certainly not unprecedented!

Perhaps the word “Unprecedented” was meant to express what has been happening in NAND flash.  Let’s look at that market.  You’ll note that the lines have different names, because the price peaks in the NAND market don’t fully line up with those of DRAM, although they are often close to each other.  Note, too, that WSTS only started providing detailed NAND data in 2004, so we have no lines for any earlier dates. 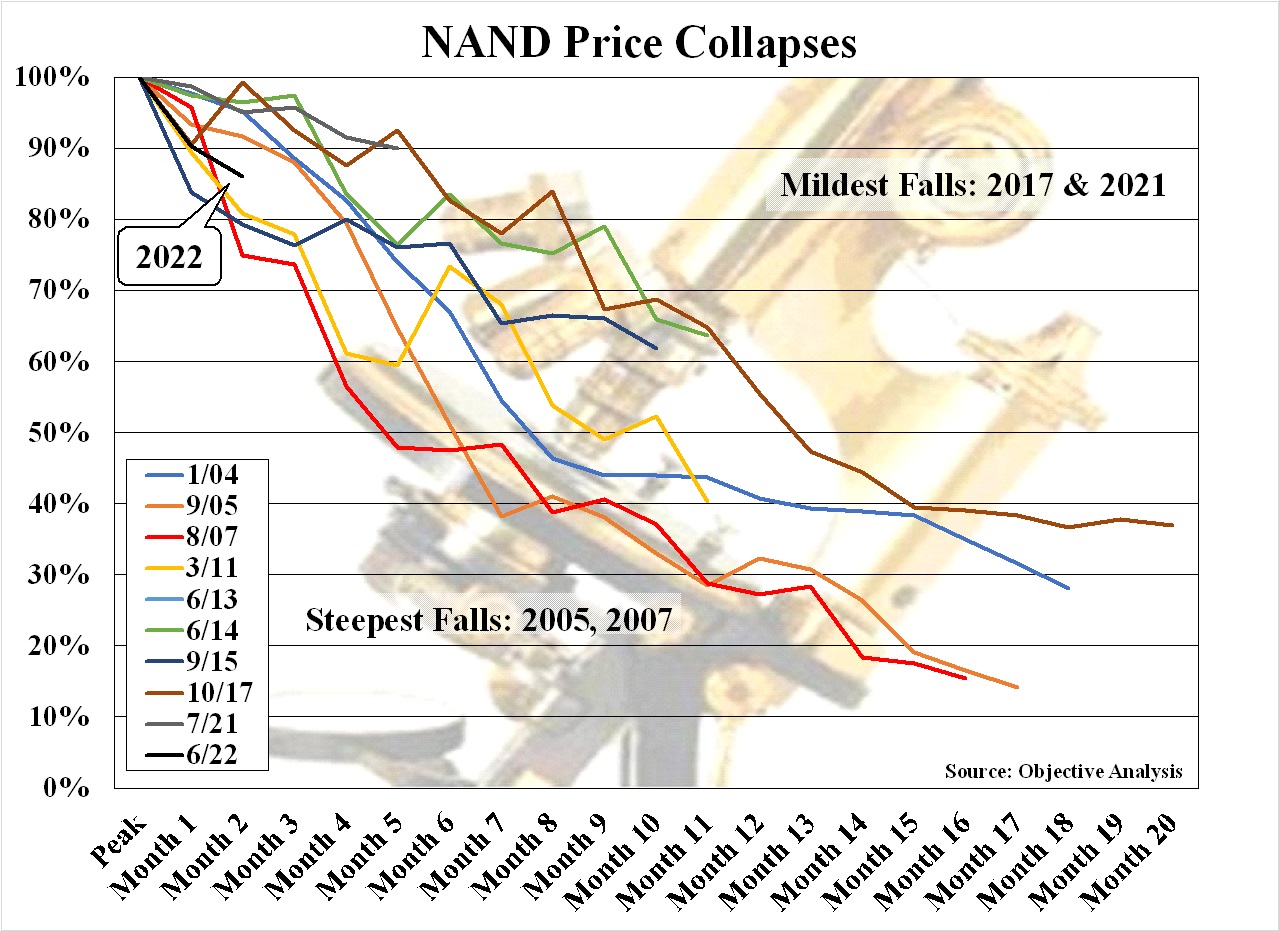 This tells us that the early part of this collapse is similar to others that have occurred in the past.  That gives me comfort that the players will be able to pull through it to thrive when it ends, as they have done in the past.  Still, downturns are always difficult, and this one, like all those that preceded it, will result in lowered profits, stock price falls, spending reductions, and layoffs.

Objective Analysis specializes in putting market events into their proper context to help our clients understand what is really happening, and helping them avoid any confusion from overstatements that could mislead them.  We would love to help your company through this and future market cycles.  Please contact us if you would like to harness our expertise to your own company’s advantage.