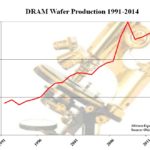 According to a Business Korea article Samsung announced, during a June 14 investor event, plans to reduce its DRAM capital spending and shift its focus to 3D NAND.

The Memory Guy sees this as an unsurprising move.  This post’s chart is an estimate of DRAM wafer production from 1991 through 2014.  There is a definite downtrend over the past few years.  The peak was reached in 2008 at an annual production of slightly below 15 million wafers, with a subsequent dip in 2009 thanks to the global financial collapse at the end of 2008.  After a slight recovery in 2010 the industry entered a period of steady decline.

The industry already has more than enough DRAM wafer capacity for the foreseeable future.

Why is this happening?  The answer is relatively simple: the gigabytes per wafer on a DRAM wafer are growing faster than the market’s demand for gigabytes.

Let’s dive into that in more detail.  The number of gigabytes on a DRAM wafer increases according to Moore’s Law, which states that the number of bits on a chip should double every year or two.  A doubling every two years (the slowest rate) translates to a gigabyte growth rate of about 40% per chip, and since DRAM chip areas haven’t been increasing much recently, that implies that the number of gigabytes per wafer is growing at a similar or slightly lower rate.  WSTS figures tell us that DRAM gigabyte demand has been growing only 25-30% for the past five years.  Combine the two and you find that the market’s need for wafers decreases at a 7-11% rate.

This is validated by this post’s chart.  (Click to expand.)  Using industry statistics we can estimate annual DRAM wafer production for the past 15 years.  You can see that growth was relatively steady through 2008, and today we are in a period of steady decline.

Will this change?  That’s unlikely.  The industry would need to reach a 40% or higher gigabyte demand growth just to stop the decline, and there doesn’t appear to be a driver for that demand increase.

Objective Analysis specializes in this kind of business research.  We welcome opportunities to work with businesses that would like to use this kind of insight to drive their business success.  Please contact us if you would like to explore ways we can help your company reach its goals.