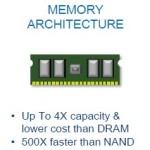 Since that’s the case, then what is this mystery memory?  If we think of memory systems, rather than memory chips we can come up with one very plausible answer.  Intel may be very obliquely referring to Diablo’s Memory Channel Storage, or some similar approach.

Diablo’s approach, which places NAND flash on the memory bus, provides a larger amount of memory on a single DIMM than can be done with standard DRAM at a lower cost per gigabyte than DRAM, and its architecture supports higher bandwidth than is available through most NAND flash interfaces.

Although Diablo’s current customers include only SanDisk, with its ULLtraDIMM, and IBM, which sells the SanDisk product rebranded as the eXFlash DIMM, Diablo has repeatedly asserted that it is working with other vendors to increase the adoption of its technology.  The Purley slides appear to indicate that Intel has decided to promote the approach.

This would be quite an accomplishment for Diablo, but it fits with a trend that Intel has been supporting for a number of years: to bring flash into the platform in order to unleash the processor’s capabilities.

You can safely bet that I will be watching the Purley platform closely for further disclosures of Intel’s memory plans!  As I learn more I will share what I can.

30 thoughts on “What Memory Will Intel’s Purley Platform Use?”