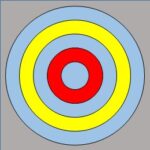 I recently was asked how much 3D NAND pitches had shrunk since the technology’s 2013 introduction.  Samsung made a big to-do about using 40nm back in 2015, but the company and its competitors don’t seem to have given an update since then.  Shouldn’t it have gone to smaller processes like 35nm, 25nm, 20nm, etc.?

The Memory Guy’s reply was that it’s nearly impossible to shrink the pitch of 3D NAND, at least not much.  This is because of the way that it’s made.  I’ll use the original Toshiba BiCS structure as an example since it’s simpler than most processes.  To help you visualize the process this post’s graphic is a conceptual drawing of one of the 3D NAND’s vertical strings viewed from the top.

So the thickness of the layers that line the hole determines the minimum diameter of the hole, and that sets how tightly the holes can be packed.

And the thickness of the layers is about as small as they can be made. They are only a few atoms thick.

The photo below, from ChipWorks (now a part of TechInsights) is an actual photograph of the layers that the diagram at the top of the post is intended to represent.  It’s an Intel-Micron floating gate 3D NAND from 2015.  My associate Andy Walker added the annotations of the different materials in the layers. 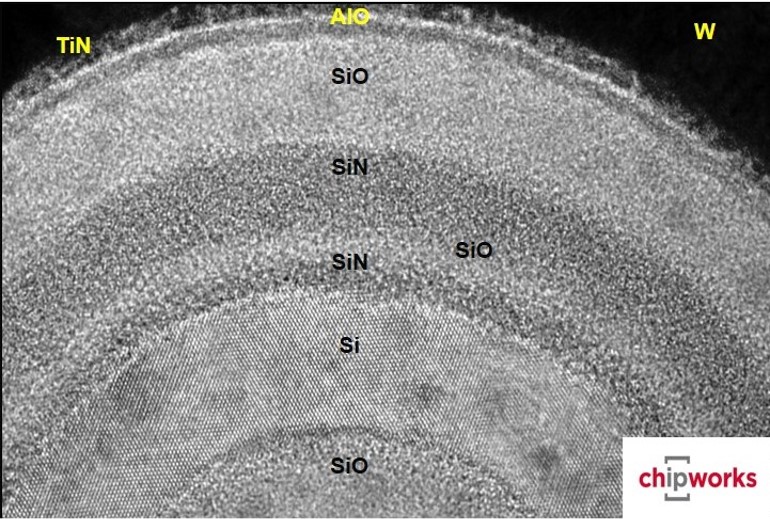 It’s a lot more complex than the first example.

Look closely at that second layer from the bottom, which is pure silicon.  Those patterned dots are individual atoms.  The thicknesses of each of the layers has been carefully considered for how it interacts with the other layers, for how electrons will behave across that layer’s thickness, and for how manufacturable a layer of that thickness will be.

All of this means that 3D NAND should remain at 40nm for the foreseeable future. Pitch scaling is rarely considered any longer in NAND.  Now R&D is focused on layer count, logic-under-array, and improved staircase configurations.

Objective Analysis is a team of extremely technical industry analysts who deeply understand the technologies that we track.  You can put this to use for your own company’s benefit.  Look us up at www.Objective-Analysis.com to learn how to harness our strengths to make your business more successful.