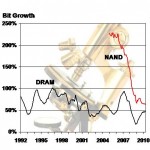 Someone recently asked The Memory Guy to comment on a projection that NAND flash bit consumption was headed into a period of reduced growth.  This appears to have stemmed from a comment made by another memory analyst.

This drove me to compile this report’s graphic, which compares historical bit growth for DRAM (bottom, black line) against that of NAND flash (upper red line).  Although NAND started out with astronomical annual bit growth of nearly 250%, it declined in 2011 to around 70%.  This brings it closer to DRAM’s rate that ranges around 50%.

This is not cause for alarm – when the NAND market was very small bit growth was expected to be high.  Large demand upturns could be relatively easily accommodated.  Today’s multibillion-dollar capacity additions require more careful planning.  This is the Law of Large Numbers.

We are at a point where NAND bit growth will probably settle into a range similar to that of DRAM.  Consumption will be limited by economics, since production increases involve huge capital expenditures.

So, in a way, we are more headed out of a period of declining bit growth than going into one.

Objective Analysis has produced a report: Understanding the NAND Market, that is available for immediate download from our website.