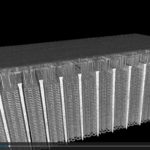 Chip reverse-engineering consultant Dick James pointed The Memory Guy to an absolutely amazing 25-second video of a 3D NAND chip.  The video’s made by the Carl Zeiss company.  It’s the second one from the top on this page: https://www.zeiss.com/semiconductor-manufacturing-technology/products-solutions/process-control-solutions/crossbeam-fib-sem.html

The video zooms around a portion of a 3D NAND die as layers are etched away and then restored.  Only the tungsten parts of the chip are shown, with the rest appearing to be empty space.  This serves to clarify it a good bit.  Dick James says that this makes it the equivalent of a 3D x-ray tomograph.

It’s a promotional piece for a Zeiss tool called the “Crossbeam FIB-SEM” that can both image and mill a chip.

Now I doubt that most Memory Guy readers would have a need for this tool, nor be able to afford something which is doubtlessly very expensive, but I am sure that anyone would admire what  it can do.  I certainly find it to be impressive!

Naturally, Dick James was able to identify the chip just by looking at it.  He says that it’s Samsung’s 32-layer part.