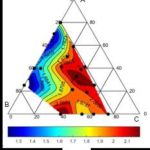 With all the new emerging memories that are being developed there must be quite a number of test runs to study exactly how well these new technologies and materials can perform.  If a batch of 300mm wafers must be used for a single test then the cost multiplies, particularly if no other test can be run on that wafer.

Another great difficulty is that most memory manufacturers run their wafers on very high-efficiency and high-volume wafer fabs.  It is perilous and wasteful to interrupt a production process to inject a batch of test wafers.  Most fab managers would rather have a tooth pulled than to change their flow to accept an experimental lot.

What can be done to improve this situation?

Well the folks at Intermolecular, Inc. (IMI) explained to the Memory Guy that they have a solution: They have built a small fab that allows single wafers to be processed with varying parameters across a single wafer.  In this way one wafer can be used to run 36 or more different experiments all at the same time.  This is clearly more economical than having to run the experiment on 36 wafers or, even worse, 36 batches of wafers!  Intermolecular says that, while production fabs are optimized for manufacturing, their fab is optimized for materials understanding.

The firm calls itself an R&D outsourcing company.

Some readers may already have correctly guessed that this will require special tooling.  While standard wafer processing tools are designed to provide absolutely consistent results across the entire surface of a semiconductor wafer, IMI modifies industry-standard tools to allow researchers to vary parameters in a controlled manner across a number of different zones on the wafer.  Not only does this dramatically reduce the cost of experimentation, it also accelerates the process, cutting it to a fraction of the time that would be required in standard semiconductor processing facilities.  IMI claims that this approach can accelerate screening by 10-100 times. 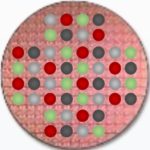 The wafer is divided into “Spots” as illustrated here.  These Spots each have a slightly different process than any of the other Spots on the wafer, as decided upon prior to the experiment.  This allows the company to characterize a number of variables on the same wafer.  The chart at the top of this post is a sample plot of such a characterization.

IMI does not typically work with a wafer from the beginning to the end of its process.  In the case of emerging memory technologies, most bit cells are constructed between two of the metal interconnect layers that are formed very late in the production process.  This means that the client company can use its own facility to process all of the normal CMOS logic layers on a wafer, then send it to IMI for the deposition of the final metal layers and the bit layers between those metal layers.

IMI appears to be researching every emerging memory type that Tom Coughlin and I covered in our recently-released report on emerging memories.  Some of the materials that IMI tells us they are characterizing are MRAM, FRAM, Capacitor-less DRAM, FTJ (Ferroelectric Tunnel Junctions), Phase-Change Memories (PCM), Chalcogenides, TRAM (Topological-switching RAM), Interfacial Phase-Change Memories (iPCM), Correlated-Electron RAM (CeRAM), and ReRAM.  There are probably others that the company is not at liberty to discuss.  IMI is working on other non-memory projects including quantum computing devices, standard HKMG logic (High-k Metal Gate), photovoltaics and LEDs, and even coatings for window glass.

Company officials tell me that IMI has run over 1,800 experiments and has classified over 225 new materials.

An interesting side note is that San Jose-based IMI is one of the extremely few fabs still in existence in Silicon Valley, including the Applied Materials Maydan Technology Center, Thinfilm technology’s fab, and Lam Research’s training facility.  Apple purchased a fully-tooled fab from Maxim Integrated in 2015, but I’m not sure that it is still being used in that capacity.  Very little silicon is actually still produced in Silicon Valley.

I was really impressed with IMI’s approach to experimentation and thought that it should be shared with readers of the Memory Guy.  It meshes nicely with the Emerging Memory series that I am currently writing, and provides a glimpse into some of the issues facing memory companies as they develop new technologies to replace established memory types.