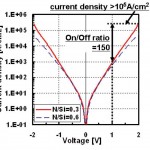 Since ISSCC is a conference at which you meet the best and brightest minds in the industry it should come as no surprise that I was able to meet with several of the most forward-thinking industry luminaries.  One of them explained to me a very fundamental difficulty with resistive RAMs (ReRAMs): These devices require a forward current to be programmed to a “1” and a reverse current to be set to a zero.  This goes against the ideal crosspoint memory design in which a bit would consist of nothing more than a diode in series with a memory element.  By inserting a diode, the current can only run in one direction, so a bit can be programmed or it can be erased, but not both.  This is called a “selector.

Today’s commercial Phase-Change Memories (also known as PCMs, PRAMs, and OUMs for Ovonic Unified Memories, or Ovonyx) require a select transistor instead of a diode for each bit.  This makes the memory larger since the transistors consume more die area than does a diode.

Later on in the conference I listened to Akifumi Kawahara of Panasonic explain how his company was able to manufacture a crosspoint matrix of ReRAM cells.  His team put a very simple device which behaved like two back-to-back Zener diodes directly beneath each memory element.  This device’s V/I curve is the graphic for this blog post.

Although this meant that “sneak” current could flow through unselected devices to corrupt the data that was being sought, these sneak paths all required the current to travel through three memory elements, and subsequently three back-to-back Zener pairs to cause any trouble.

Yes, there is a disadvantage to this: The 20:1 on/off ratio of the memory cell was lowered to a 4-5:1 ratio, but even a 4:1 ratio is relatively easy to distinguish.

The Memory Guy tips his hat to the researchers at Panasonic for finding such a simple, yet elegant, solution.

For an overview of the need for alternative memories with projections of when these devices may hit the mainstream, see the free white paper Phase Change Memory Becomes a Reality, downloadable on the Objective Analysis Home Page.

2 thoughts on “How Do You Make a ReRAM Work?”