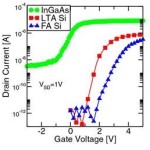 For those unfamiliar with the term, the “gate first” approach is the foundation of Toshiba’s BiCS NAND, and presumably Micron’s floating gate 3D NAND.

imec explains that “Replacing poly-Si as a channel material is necessary, as it is not suitable for long-term scaling.”  Further they report that on-state current (ION) and transconductance (gm) of the III-V channel was better than that of polysilicon devices, without any programming, erase, or endurance degradation.  The device’s characteristics are shown in this post’s graphic.

The consortium reports that the current through the END_OF_DOCUMENT_TOKEN_TO_BE_REPLACED