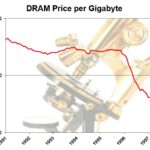 The Memory Guy has been getting calls lately asking how to tell that a shortage is developing.  My answer is always the same: It’s hard to tell.

One indicator is that spot prices which were below contract prices rise above contract prices.  This doesn’t happen for all components or densities of DRAM or NAND flash at the same time.  Some of these transitions are temporary as well.  It takes patience to see if it was a momentary change or if it was the onset of a shortage.

Lead times represent another indicator.  If the lead time for a number of components increases then those chips are moving into a shortage.  Lead times have recently been rising for both NAND flash and DRAM.

A third indication occurs when suppliers start to groom their customer base, telling smaller customers or those with poor credit to take their business elsewhere, or perhaps shifting their less desirable direct customers to their distribution channel.  We have heard of certain specific instances of this, but no general trend is yet apparent.

For some reason contract prices tend not to rise during a shortage, or at least they don’t rise much.  That’s shown in this post’s graphic.  The chart illustrates DRAM average price per gigabyte for the longest shortage in the history of the DRAM market, one that lasted from late 1992 through the end of 1995.  The price increases during that time are very small when compared to the decreases on either side of it.  This means that contract pricing is not a very good indicator of a shortage, but it does a wonderful job of indicating an oversupply!

Unfortunately, the customer response to a shortage is to increase raw materials inventory: If you have trouble getting the DRAM chips that you need, then you work hard to get some extras to keep on hand in case the situation worsens.  Since buyers all do this at about the same time, they can rapidly cause a mild shortage to become a serious shortage.  This means that the switch from a stable market to a shortage will be relatively sudden and very dramatic.

Objective Analysis has been anticipating a NAND flash shortage for the past two years, driven by the difficulties manufacturers face when converting from planar NAND to 3D.  This shortage has been slow to materialize, but we still trust that it will impact the market in the not-too-distant future.  Our clients have been warned to watch for this.

But nobody can tell precisely when this shortage will hit.  We must simply be on our guard, and wait, and watch!

4 thoughts on “When a Shortage Looms”